PLEASE SAVE THE DATE OF THE 20th ANNIVERSARY FESTIVAL!

The Story of the

Once upon a time, a little girl grew up on a farm in rural Illinois.  She loved the Arts but was never given the opportunity to go to an art museum or to meet a “real” artist in person.  When the little girl grew up, she became an art teacher in the Kaneland School District.  Realizing that Kaneland was similar to the rural setting in which she grew up, the teacher began envisioning an event where students, family, and community, far removed from the art culture scene of Chicago, could experience the Arts.  She dreamed of the Kaneland Community experiencing the Arts in an interactive setting, absolutely free and the Kaneland Community Fine Arts Festival was born.

Bonnie Whildin, the little girl turned art teacher, began teaching at Kaneland full time in 1985 with her idea of a Fine Arts Festival fresh in her mind.  However, it was not until May of 1998, with the collaborative help of another art teacher, that the first Festival actually became reality.  The first annual Kaneland Fine Arts Festival was a two hour event at Kaneland South Elementary School (now, Kaneland John Shields Elementary School).  Attendance was approximately 200 people and the presenters were made up of local artists and musicians.  No more than ten presenters gave workshops to their audiences in the classrooms spreading the Festival around the elementary building. In order to make the Festival free to the public, the operating budget was minimal.  Money was donated from the Parent Teacher Associations.  It was a small event, but the start of something special.

Since its inception in 1998, the Kaneland Community Fine Arts Festival has grown beyond Mrs. Whildin’s vision.  Through the years, the Festival has been hosted in several buildings on campus including two elementary schools and the middle school, until finally finding a permanent home at the high school.  The layout has changed and has been made more cohesive and “visitor friendly”, however, the mission to bring high quality visual and performing artists to our rural communities has remained the same.   The Festival took a hiatus in 2005 during the construction of the new Kaneland High School Auditorium, allowing the planning committee to prepare for the Grand Opening Celebration of the Kaneland High School Auditorium in conjunction with the Festival in Spring 2006.  Currently, the Festival welcomes 3,000 guests to engage in the opportunity to experience the Fine Arts for no admission fee.

Now expanded to its 7 hour celebration of the Arts, the Festival saw a need to utilize the state of the art performance space for performance events held throughout the year.  Beginning officially in the fall of 2009, the Festival began the Festival Performance Series.  This series of events brings professional, quality performances to the Kaneland Auditorium at affordable prices.  In July of 2010, the first annual Kaneland Community Summer Theatre production, The Music Man¸ was performed on the Kaneland High School stage.

The Festival is produced by a dedicated troupe of faculty and community members who support the Arts and want to continue the tradition begun so many years prior.  The committee hires artists, gathers volunteers, creates the logistics of the Festival day, publicizes and advertises to surrounding communities, and assists in raising funds to support all aspects of the Festival.  Working as a cohesive team, the committee works to uphold the mission and continue to grow Mrs. Whildin’s vision.

And for the Rest of the Story …

Pictures from the Kaneland Community Fine Arts Festival can be found in the Photo Gallery.

PLEASE CLICK HERE IF YOU’D LIKE TO VOLUNTEER FOR THE FESTIVAL! Remember that KHMS/KHS students get KORT/GIVE hours for their work!

If you are interested in being an artist at the Kaneland Community Fine Arts Festival in the future. 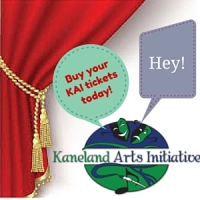 Countdown to the Festival!

The 20th Annual Kaneland Community Fine Arts FestivalApril 7, 2019
CELEBRATE 20 YEARS WITH US! Admission and Parking are FREE! Enjoy an amazing day celebrating the Arts! Wonderful opportunities abound for all ages